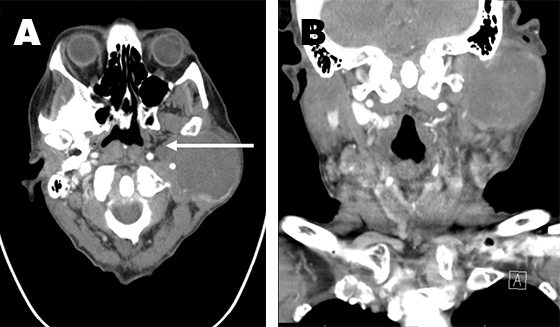 An 85-year-old woman presented to an otolaryngologist with left-sided facial swelling and facial paralysis. A contrast-enhanced CT of the neck was performed (Figures A, B) demonstrating a mass infiltrating the left parotid gland impressing upon the left parapharyngeal space (arrow in A).

The patient underwent a total left parotidectomy and parapharyngeal dissection. Intraoperatively, the left parotid mass was noted to encase the branches of the left facial nerve, as well as the marginal mandibular nerve. Pathology revealed a soft-tissue sarcoma, specifically a myxofibrosarcoma.

As the most common malignant connective tissue sarcoma in older adults, myxofibrosarcoma was initially classified as a myxoid variant of malignant fibrous histiocytoma.1,2 These mesodermal-derived neoplasms most often arise from the subcutaneous layer of the lower extremities in older patients. Advanced disseminated cases of myxofibrosarcomas have been known to metastasize to the lung, bone and liver.3

Amongst the anatomic head and neck regions, myxofibrosarcomas have been reported to involve the nasal cavity and paranasal sinuses, mandible, orbit, larynx, parotid gland, oral cavity, ear, eyelid, and infratemporal space.2,3 The most common head and neck location is the nasal cavity and paranasal sinuses, seen in up to 30% of cases.3 Primary myxofibrosarcoma of the parotid gland is rare, with approximately 30 cases reported worldwide.4

Unfortunately, predicting these rare tumors on imaging is challenging as their imaging features are nonspecific.3 On CT, they most often appear as a lobulated soft-tissue mass, similar to muscle in attenuation. They also often appear with centralized hypoattenuation, which may be related to underlying necrosis or the myxoid composition of the tumor.3 In up to 20% of patients in a study by Parks et al, ossification or calcification was detected within the lesion.3

Due to their nonspecific imaging features, myxofibrosarcomas arising in the head and neck region are often confused with several other soft-tissue and fibrous abnormalities and neoplasms such as fibrosarcoma, pleomorphic rhabdomyosarcoma, nodular fasciitis, and fibromatosis in addition to the more common classic parotid neoplasms.3

Local recurrence rates are high regardless of tumor grade, making negative surgical markings critical.2 As in this case, many oncologists perform subsequent adjuvant radiotherapy in these patients.5 After successful surgery, this patient completed 31 rounds of adjuvant radiotherapy. However, localized disease recurred.