JAOCR at the Viewbox: Hydroxyapatite Deposition Disease of the Lateral Collateral Ligament 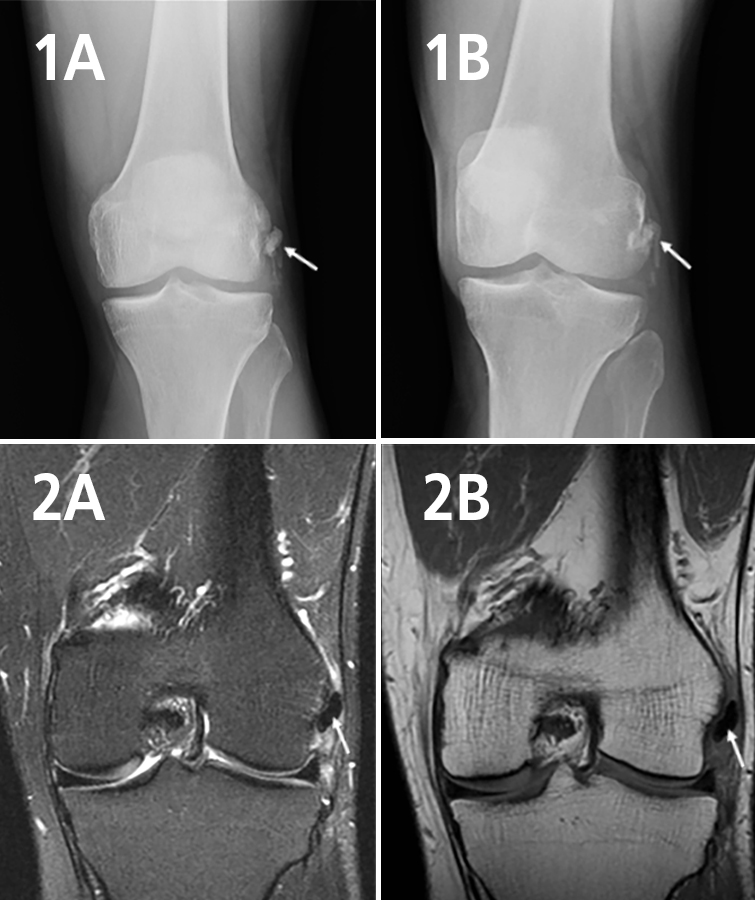 AP and internal oblique radiographs (Figures A, B) demonstrated a 3.3-cm calcification (arrows in A, B) near the expected origin of the lateral collateral ligament (LCL). Fat-saturated T2- and nonfat-saturated T1-weighted MR images (Figures C, D) demonstrate focal hypointensity (arrows in C, D) in the proximal LCL with surrounding soft-tissue, edema-like signal.

Hydroxyapatite deposition disease (HADD) results from calcium hydroxyapatite crystal deposition in periarticular soft tissues, often in areas of decreased vascularity.1 The rotator cuff is most commonly affected, but it can also be seen in other tendons, ligaments, and joints, including the longus coli muscle/tendon.1,2 Intra-articular deposition results in accelerated degenerative disease.

The presentation is variable, but three phases have been described.1 In the initial silent phase, calcium is contained within the tendon/ligament, seen as amorphous high density on radiographs with minimal symptomatology. During the mechanical phase, the deposits enlarge and liquefy, seen as poorly defined areas of increased density on radiographs, and the patients have acute, often severe pain. Eventually, the calcium disperses into the adjacent soft tissues/bursa and is resorbed. If resorption fails to occur, calcium crystals may persist in the chronic phase, characterized by mature calcification on radiographs and pain and decreased range of motion clinically.1